While Memorial Day is often a time to spend with family and friends, this is one holiday that is actually not intended to be a celebration.

Memorial Day is a time to remember those who have made the ultimate sacrifice to defend our nation, our citizens, our homes and our freedom for over 240 years.

We salute those who serve our country and our citizens in all the branches of the armed forces, as well as law enforcement and fire fighters, whose mission is to protect and serve.

Many of our ancestors came to this land from countries where people were considered mere subjects, and were servants of kings and dictators; where speech was censored, actions were watched and thoughts were controlled.

They came to live as free man and woman, and so that we, their children, grandchildren, and future descendents would never see or know the fear, oppression and tyranny from which they fled.

It is our prayer that the United States of America may always remain one nation; and that each of our families, our children and their descendents may continue to live in the land of the free – because it is also the home of the brave. 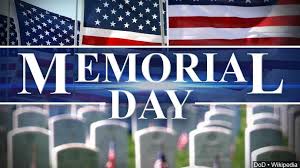